Not all sector job losses are equal

An easing of coronavirus restrictions is leading to improvements in the jobs market, but new analysis shows some sectors hardest hit by the pandemic contributed fewer job losses overall.

“We have seen a slight recovery over the past six weeks, but national job numbers are still 6.4 per cent lower than before the start of the virus outbreak,” Taylor Fry principal Alan Greenfield said.

“Although we are not out of the woods yet, it is comforting to see job numbers have remained stable over the last weeks and that some industries have seen an improvement.”

The accommodation and food services sector has been hardest hit by the coronavirus pandemic, with about 28 per cent of workers losing their jobs, accounting for about 32 per cent of total jobs lost.

Victorian workers in that sector fared particularly poorly, with about 33 per cent losing their jobs compared to 28 per cent in NSW and 23 per cent in Western Australia. Only the ACT had a higher proportion at 33.7 per cent.

“The hardest hit industry across the country is without a doubt accommodation and food services,” Mr Greenfield said, but there had been improvements since restrictions began easing. However, a fresh six-week lock down in Victoria would further exacerbate the state-by-state divide. 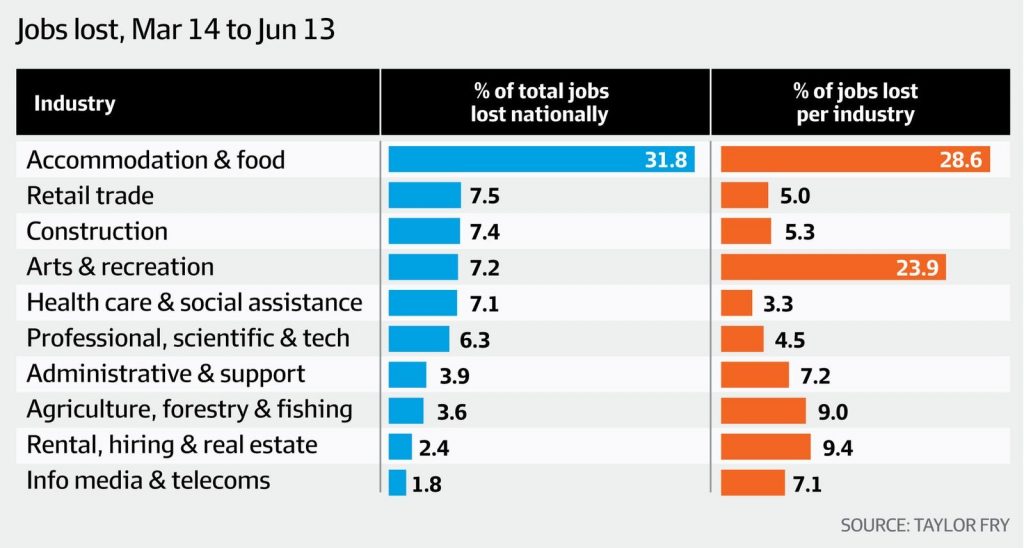 The analysis also revealed sectors which saw large percentage declines in employment have not contributed proportionately to overall job losses.

The arts and recreation sector lost 24 per cent of workers – the second-highest of any sector – however, it accounted for only about 7 per cent of the overall decline in employment between March 14 and June 13.

By comparison, the healthcare and social assistance sector lost a relatively small percentage of jobs over the same period – 3.3 per cent – but accounted for about the same number of overall jobs lost.

Mr Greenfield said accommodation and food services, retail, and healthcare and social assistance were particularly exposed to the impact of the virus.

“Those employed in these three industries on a casual basis are often the first to be let go or have shifts cancelled, leaving them very exposed to the fluctuations in distancing practices,” he said.

“These industries employed 30 per cent of the workforce before the pandemic so when they are impacted, it’s felt across the economy.” 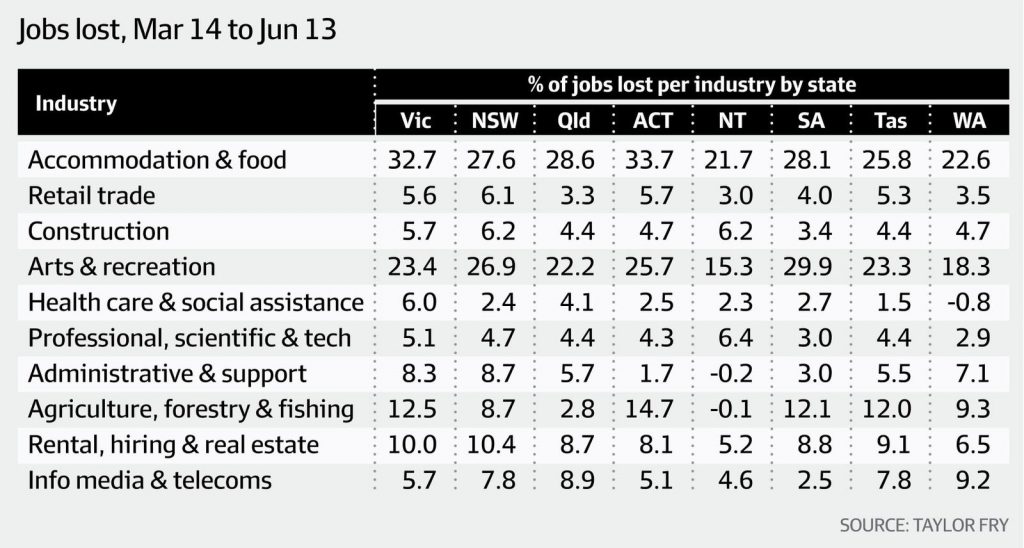 Retail trade and construction, which each recorded a decline in sector employment of about 5 per cent, accounted for the second and third-largest overall declines in employment at 7.5 per cent and 7.4 per cent respectively.

“Construction and retail trade employed roughly 10 per cent of the workforce before the pandemic, but account for 15 per cent of job losses to date,” Mr Greenfield said.

He added the recent virus outbreaks in Melbourne highlighted that pandemic control was about more than saving lives.

4 tips to improve your CV
Expert Advice
Article
A career in agriculture can lead you anywhere!
Finding Your Direction
Podcast
Australia needs more engineers. And more of them need to be women
In the News
Article